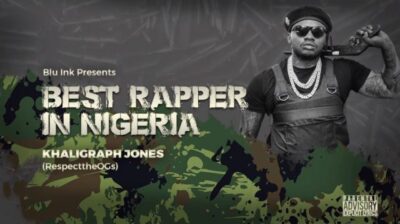 Kenya number one hip hop act, Khaligraph Jones has just dropped a diss track in response to Blaqbonez after the MVP Awards with some witty and hard punchlines titled “Best Rapper In Nigeria (Blaqbonez Diss)”. Khaligraph Jones who recently won the Sound City MVP Hip Hop act of the year in the just concluded 2020 Soundcity MVP Awards held at Eko Hotel shades the chocolate City act after he said that the Kenyan rap god doesn’t deserve the award.

Khaligraph Jones also threw shades at his fellow Kenyan rappers, Saying he is the only Kenyan rapper that has to be popular in Nigeria. He also paid respect to the OGs in the rap game (#RespecttheOGs) giving all Nigerian rappers like M.I Abaga, Modenine, Iceprince, Ycee and lot more respect.

“he Nigerian Rap Scene Has just been Colonized, Khaligraph Jones is the Best Rapper There, I am coming to get My citizenship. the OG shall be Respected #respecttheogs #makeafricanhiphopgreatagain.”

“they never heard of Blaqbonez they’ve only heard of Black Panther,bam Now tell me how you think you ain’t in my level clown if i was you i would retire and settle down, why you looking stressed my omigo, the purpose for this diss is to help you boost your ego, so in your interview now you claim to be the next Davido, then i came and i beat you, right in front of your people, now you wearing wedding dresses, damn what a shame!, Nigerian rappers used to be the hardest in the game but along the way it changed and then you started chasing fame, fix your lifes up before you think of mentioning my name”.

We are definitely waiting for Blaqbonez reply to the diss!! So right now it’s a 1-0 for me..lol