Peter and Paul Okoye needs to get back as PSQUARE. See reasons here! 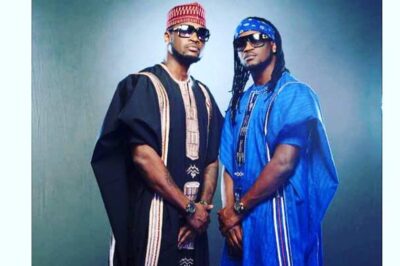 Peter and Paul Okoye needs to get back as PSQUARE. See reasons here!

Psquare was one of the best if not the best musical brand in Nigeria back then. Peter and Paul Okoye who started back in the days at Uniabuja was competing with the industry giants like Danfo Driver, 9ice, Zule Zoo, Tony Tetuila and the rest. The Jos boys was so full of joy where paul was known for his sweet voice and his unique dance steps before he stopped dancing due to reported accident and Peter was that fine boy with six packs who can break-dance so much to even save his life. The whole Psquare saga was for personal reasons and family matters that made the duos had to go solo for the second time after the first break-up. After the first break-up, they released a single titled “Bank Alert” which actually made wave in the Nigeria’s music industry, topping charts for many months and it became a street anthem in the mouth of many Nigerians and in Africa as a whole. Psquare was an international brand, had so many collaborations with international artiste with the likes of Rick Ross, T.I, Akon and so on.

Jude Engees Okoye, their elder brother who is a known musical video director started all along with them from “Senorita” to “Do Me” , “Oga Police” and “Who Dey Here” directing most of their musical videos. Even when dey started bringing Clarence Peters for a video shoot, Jude will always make sure Clarence doesn’t play with the Video courage of the song. Psquare was known with so many worldwide hits and so many worldwide albums. “Ifunanya” song off the album GAME OVER released back in 2007 is still my best love song a Nigerian artiste has ever done. Infact all the songs Psquare ever got mentioned-in is always different and unique from other Nigerian Artiste. 2baba Idibia is a known legend in the industry no doubts, but Psquare’s dominance in the industry was still a fight he has to face to be relevant.

Issues surrounding their splits is something that is still not clear to his fans. Some said it was because Peter’s wife is Yoruba and couldn’t connect with the Okoye family and some said Paul was so selfish that his brother, Jude was misleading him. My problem is.. they are family and family knows how to sort things inside the family. Since they went solo, Paul came with a brand tagged Rudeboy and Peter was named Mr P which is so far not rosy for them as they both struggle to even make the top 10 charts. Paul was so lucky to get a hit song titled “Reason With Me” but that didn’t last for long and couldn’t get him an individual award in Nigeria’s Headies. Mr P is still busy with his Yankee vibe kind of song where he released “Ebeano” which can’t even go near “Omoge Mi” and “Shekini” in terms of quality and the lyrical contents. It is very certain that the pair still struggles till date and the only thing that can make them go back to the top of Nigerian music is to get that brand PSQUARE back. Psquare fans still remains till date, the only issue here is they are divided because of the splits so far, and i think if Psquare can make a good come back today, the fans won’t waste no time in coming back together as one. We need that brand PSQUARE back. I know we are all humans and pride must sets in somebody’s life but right now Psquare fans don’t really care who apologises first, they just want the brand back.

WE NEED PSQUARE BACK