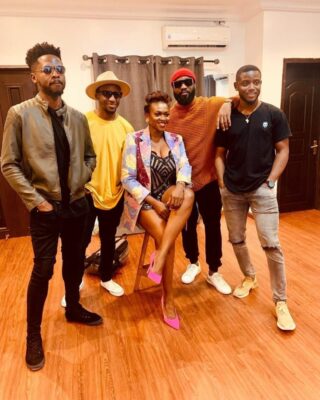 It seems very likely we might be getting a joint vocals in the form of a song and music video from music talents Waje, Praiz, Chike, Bez and Johnny Drille.

The four vocalist were sighted at a musical studio yesterday been Saturday, 7th March, 2020 and took to their social media to post hot pictures from the assembly.

In addition to this news, Chike’s studio project titled “Boo of the Booless” album is currently hitting and topping music countdowns, Praiz also has a new music video and studio album out, Bez has a brand new album out too, Waje and Johnny Drille are also scheming on releasing a new studio later this year.