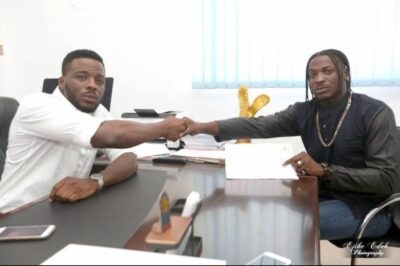 Tobechukwu Victor Okoh popularly known as Peruzzi has finally responded to the claims King Patrick of Goldenboy Entertainment made, dragging him and DMW boss, Davido to twitter.

Recall that Patrick accused Peruzzi for alledge breach of contract to his Goldenboy Entertainment and also not getting royalties from Davido’s DMW and introducing him to Davido as the guy that shot his music videos rather than his label boss.

Well, Davido reacted in instablog9ja’s comment section on instagram yesterday by saying Peruzzi is the best thing that has ever happened to him and DMW, blasting King Patrick that he is the problem.

Peruzzi reacted to the claims made by the Goldenboy Entertainment CEO in a tweet which were deleted in 5mins insisting he didn’t bite the fingers that fed him and also accusing King Patrick of selling his songs to individuals and Nollywood without paying him at all.