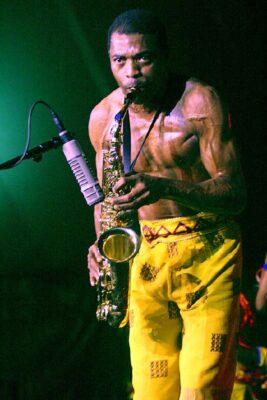 ABEG-ABEG Media team made some research behind the exhilarating sound that has rejuvenated highlife and made late musician Fela Ransome-Kuti the talk of the town during his days in the Nigerian Music Industry.

In 1963, jazz trumpeter Fela Ransome-Kuti, then just back from the United Kingdom where he read music, startled Nigerians with a vow that he would cause a jazz revolution within a few years. When he was reminded that Nigerian did not appreciate jazz and that several talented Nigerian musicians had tried before to popularise jazz but failed woefully, he retorted that they failed because they were not dedicated enough.

According to DRUM, the Young jazznik completely spurned highlife that was the rage at the time, assembled four players as the nucleus of the revolutionary group and started to practise every evening at his home, Fela was still with the boys and very much in the music business.

But instead of revolutionising jazz, Fela Ransome-Kuti and his boys have gone back to highlife; the music of the talking drums Fela had turned his back on. But, wow, what they have done to highlife! It has hit Lagos and the whole world with a great bang.

Even the old favourites like Victor Olaiya, Roy Chicago, Eddy Okonta, Rex Lawson and Victor Uwaifo are agreeably stunned by the brand of highlife that Fela and his Koola Lobitos are playing. It is hard to give Fela’s music a name. In the words of popular bandleader, Agu Norris, of the Princess Alexander Calypso fame: “It is entirely Fela’s own revolutionary idea about sound.”

Said another bandleader: “Honestly, I don’t understand what the boy is playing, but i agree it is making a hit. I must be frank to admit that Fela is changing highlife, but it is too early to say how far he will go.”

Said Late Fela himself: “I am trying to make music out of highlife so that it can be acceptable to the whole world. At the moment, it seems we are just playing highlife to ourselves while Latin American music is spreading far and wide. I don’t see why we should not improve highlife and export it to other countries.”

Completely devoid of the melody that is the most essential of the ingredients of highlife music, Fela’s highlife is an intriguing combination of heavy African beat and swift-slow rhythm.

“Highlife,” Fela agreed, “is our own music and i have realised that it is what our people want. To continue to play jazz all the time would be to continue to deceive myself. So i decided to give the public what it wants; but in an improved form.”

There is no doubt that Fela succeeded brilliantly in giving the public what he wants. To watch the exhilarating movements on the dance floor back in the days as him and his boys dished out their revolutionary highlife numbers is to realise the limitless strength of art. Fela and his Koola Lobitos are history in the Nigerian Music industry and perhaps the most popular dance band Nigeria and Africa has ever produced.