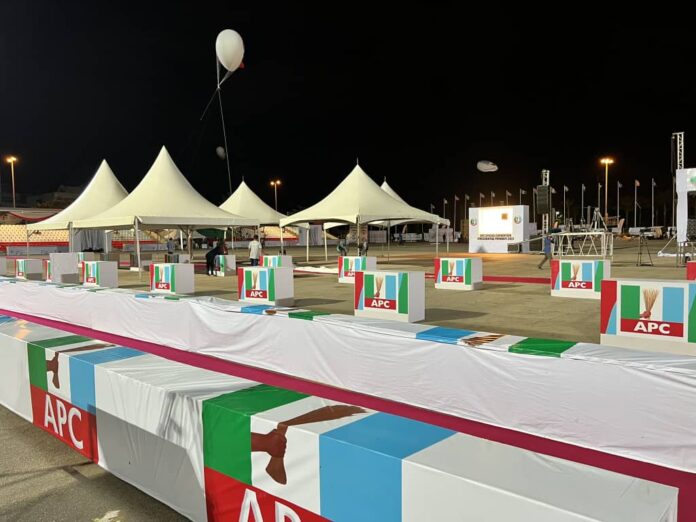 The just-concluded APC PRIMARY ELECTION is quite a well scripted MELODRAMA.

Now, for the sake of those who didn’t study literature, or who studied literature on a surface level, a melodrama is a type of drama accompanied by music to intensify the effects of certain scenes, which are either thrilling or pathetic. In the case of the APC primary election, there was a disc jockey creating similar effect with several amusing songs. In my own candid opinion, video should be submitted to OSCAR for an award consideration.

We witnessed actors who have had several mischievous indoor rehearsals and then who came out to play specific role as instructed by the experienced and aged director, who also have metamorphose into the status of a Demigod for quite a long time.

The so called delegates are the unfortunate minor characters who were coaxed by irresistible peanuts to decide the fate of millions of Nigerians, and can be likened to Judas in the Bible who attempted to trade Jesus for some petty shillings.

You might be wondering why an aspirant who bought a presidential form for 100 million naira will step down for another aspirant so easily? Well, that’s because behind the scene, there have been some unimaginable checks and balance which will turn out in favor of those who did so, as established by the script director, so in this scenario, there’s absolutely nothing to lose as there will certainly be mouth watering compensations through paychecks and political appointments.

Nigeria politics is a poorly structured sentimental merry-go-round having aged persons as participants, while the younger generations are either forced to become bystanders or subjected to laughable puppets. So much for democracy.

Anyway, it was fun filled, my favorite actor, who is a minor character too was YAHAYA BELLO, he was the chosen character made to effect comic relief. He came prepared like an SUG presidential aspirant after building a major flyover bridge in Kogi State, perhaps to him, that was enough track record to convince the electorates to vote him.

I look forward to the drama on the bigger stage, where there will be the presence of the JAGABANS, the ATIKULATED and the PETER OBIDED. It will certainly be one of the most theatrically melodrama of all time. Meanwhile, get your PVC if you want to be feature in it.