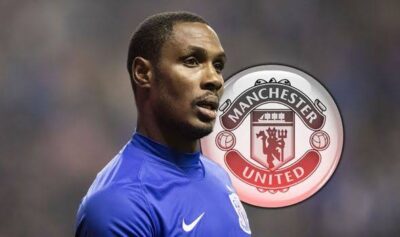 Ex-Super Eagles striker, Odion Ighalo has finally made a transfer deadline switch to Manchester United on a 6-month deal with an option to buy.

According to Skysports, the Red Devils club has finalised the transfer which will be bring the 30-year-old back to the English Premier League after a scintillating spell at Watford from 2014 to 2017.

The Nigerian footballer who has been on a pre-season session with Shanghai Shenhua due to the Chinese Super League delay; a result of the current coronavirus outbreak, is Manchester United’s second official signing after securing Bruno Fernandes on thursday 30th January, 2020.

Jose Mourinho also made a last attempt to sign the experience striker on a loan but it failed due to the players personal desire to play for Manchester United.

Bournemouth striker, Joshua King was a long time target this January transfer window for the club as Man Utd first bid of £20m was rejected. Joshua King was targeted to cover the void left by Marcus Rashford due to injury and it appears Ighalo will be the man for the job.

Inter Milan was also interested in signing the Ex-Nigerian international when their chase of Chelsea’s striker Olivier Giroud didn’t go through butb the Nigerian has his desire to return to the EPL.

Manchester United will host Wolves on Saturday 1st Ferbruary, 2020 as Odion Ighalo won’t be available for selection but Bruno Fernandes will be likely to make his debut for the Red Devils club.