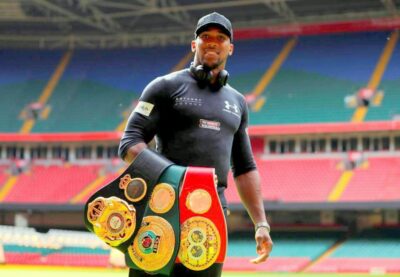 Nigerian-British boxer, Anthony Oluwafemi Joshua has defeated Mexican Andy Ruiz Jr in Saudi Arabia in their popular professional boxing rematch. Anthony Joshua suffered an embarassing defeat to the Mexican back in June 1, 2019 and he didn’t let that to repeat itself.

As the game started, Anthony Joshua was keeping on with the plan throwing most punches at the Mexican. Andy Ruiz was inflicted with pains and he knew the game won’t be easy for him.

In the 8th round where everything was looking almost over for Andy Ruiz Jr, the Mexican was still up in the game and he repeated those fast punches he did in the first match where he made history by knocking the heavy weight champion out in the 7th round back in June. Anthony Joshua’s height was a gain for him as he blocked and managed a double punch at Andy Ruiz Jr to keep the game alive.

This rematch was seated by 15,000 capacity in Diriyah Arena which makes it in history the first professional boxing match in the Middle-East.

Anthony Joshua has collected back his IBF, WBO and WBA titles for his marvelous display against the Mexican.