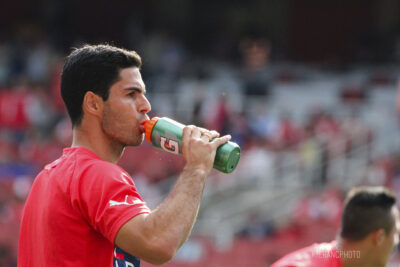 Manchester City assistant manager, Mikel Arteta Amatriain has been confirmed as new Arsenal’s head coach after days of speculation. Mikel Arteta who is said to replace Pep Guardiolar at Manchester City has signed a three and half year deal at Arsenal.

During Mikel Arteta’s playing season, he was brought from Everton to Arsenal in 2011 and stopped playing for the Gunners in 2016 where he won two FA Cups and two Community Charity shields. Manchester City hierarchy are adamant to keep the Spanish International despite strong interest from his former club but the interest from Arsenal were to good to be turned down.

The Spanish International has taken over from Ljungberg as the new Arsenal manager. Freddie Ljungberg took over the Interim role at the club after the sacking of Unai Emery at the end of November where he won just one match out of five (two draws and two defeats).

Arsenal is set to travel to the Goodison Park on saturday, 21st December 2019 for his first English Premier League game incharge. Match to be played at 1:30pm CAT.

This is a new era for Arsenal Football Club.