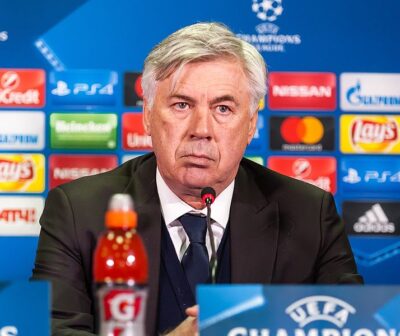 Former Chelsea and Real Madrid manager, Carlo Ancelotti has been confirmed as new manager for the Toffees. Carlo Ancelotti who was sacked by Napoli after a difficult run in the Serie A has signed a new deal for Everton. Duncan Ferguson who is still in the caretaker role at the Goodison Park against Arsenal will be joining Carlo Ancelotti’s coaching staff along side his son, Davide.

The Italian international will stay in the stands at the Goodison Park for the Arsenal game alongside Farhad Moshiri and other board members.

Carlo Ancelotti is expected to take over on Sunday with his first game against Burnley on the 26th of December, 2019. Carlo Ancelotti who took over from Chelsea in 2009 won the Premier League, The FA Cup and the FA Community charity shield.

Former Everton coach, Marco Silva was sacked at the early stage of December 2019 after a 5-2 heavy defeat at the Merseyside Derby and since then the Toffees have been looking for a replacement.