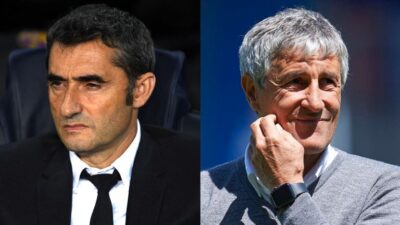 Ernesto Valverde has been finally axed by his current employee, FC Barcelona after two-and-a-half years in charge of the Catalan giants with former Real Betis and Las Palmas manager, Quique Setien signing a contract as their new manager that will run until June 2022.

After the sacking of Louis van Gaal back in January 2003, Ernesto Valverde is the first Barcelona Head Coach to be axed during the mid-seaason.

Barcelona are currently topping the La Liga table with a goal difference ahead of Real Madrid but were knocked out by Atletico Madrid in the semi-finals of the Spanish Super Cup in Saudi Arabia where Real Madrid were the eventual winners of the competition.

Barcelona were drawn with Napoli for the Round 16 clash of the Uefa Champions League which will be played on February, 2020 as they look forward to win the title since 2015.

Ernesto Valverde who has previously coached Valencia and Atletico Bilbao was Luis Enrique successor at Barcelona in 2017 winning 2 league titles consecutively during his spell at the club.

Since joining Barcelona in 2017, Valverde has coached a total of 145 matches in all competitions, winning 97 with 32 draws and 16 losses. He also added Copa del Rey and Spanish Super Cup to Barcelona’s trophy cabinet during his spell at the club.

Quique Setien previously coached Las Palmas and Real Betis where he took the former to a La Liga survival in 2015 and taking the latter into European football in 2018.

It was reported that former player, Xavi who is currently the Head Coach of Al Sadd was available to take the job at summer but the Catalan giants decided to go for an immediate appointment.