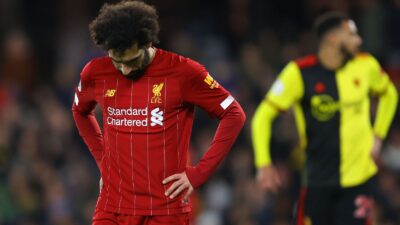 Sarr chipped in to break the barren score after 54 minutes, before then coming through to double Watford lead six minutes later.

Watford captain, Troy Deeney finished off the shocked scoreline after taking advantage of more slow defending side from Klopp’s men with 18 minutes left in Vicarage road.

The Hornets move out of the relegation area with the aid to a first league win since December 28, 2019 while Liverpool still tops the league with 22 points ahead of Manchester City, though having now played a match more than the defending champions, after watching their 44-match unbeaten premier league run ends in scintillating fashion. See what Van Dijk told Sky Sports below;

“First of all, credit to Watford,”. “They deserved it with the chances they created. They stuck to their plan. They scored three goals and I don’t think we created too many chances. We want to look to ourselves and we have to improve again. It is a tough one to take.

RELATED: Klopp signs new Liverpool contract that will keep him in Anfield till 2024

“The last game was one set piece and one good goal. Today, we should be better. If you look at the whole season, we have been good defensively. I think we have the most clean sheets in the league. The good thing about our mentality is that we will work to improve. It is not acceptable that we lose here 3-0.

“Losing hurts. The records are for the media. We never mentioned it. We want to keep going and win the next game ahead of us and that is in the FA Cup and then we have Bournemouth at home. We want to strike back and show what we have been doing all season. That is the only way forward.”

Watford will travel to Selhurst Park to face Crystal Palace in the Premier League on Saturday 7th March, 2020 by 4pm GMT.

Meanwhile, Liverpool will fight against Chelsea at Stamford Bridge in the FA Cup fifth round on Tuesday night, before then welcoming relegation-bound Bournemouth at home next Saturday, 1:30pm.